Three clubs in, and I get to hand out the first round of certificates. I even remembered to bring a gold pen along. You know certificates aren’t official unless you write them in gold, right? 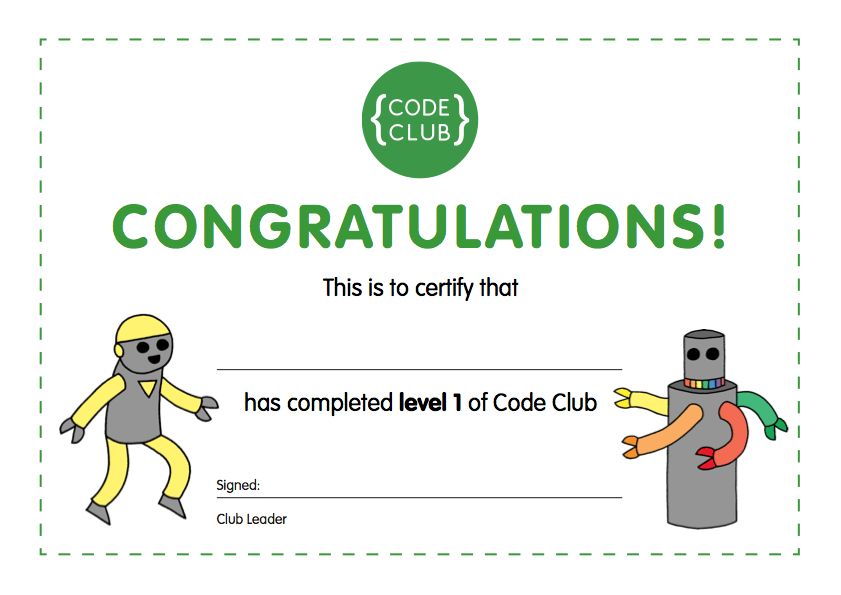 I happened to be on my way over to De Beauvoir Primary at exactly the moment that all of the year five kids were being led back from a local university visit. The kids recognised me and I got scooped up in the rabble. Speaking to one of the teachers shepherding the kids led to a question I hadn’t exactly considered:

So how long will this Code Club run?

Well, term-by-term, but for as long as the kids are interested, I suppose. Forever, hopefully.

It’s been interesting to bump into some other after-school club leaders over the past three weeks. I bet debate club is an awful lot of fun.

Anyway, on to this week’s club… 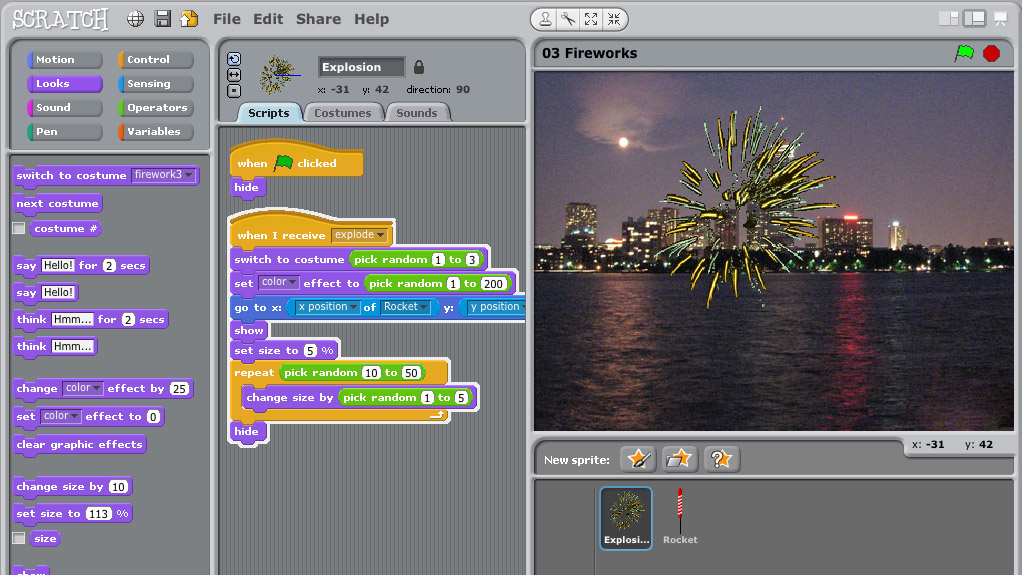 Project three is Fireworks. Click anywhere you like in a city scene and a firework will shoot up to that point and explode with a bang.

I know what you’re thinking. That’s not a game! Well, it may not exactly be a game per se, but it is pretty cool and the game is to see who can make their fireworks the biggest, loudest and most colourful.

This project comes with some custom graphics and sounds, so I spent a while running around with a thumb drive again. Slightly contrary to what I said last time, I don’t recommend this. It uses up quite a lot of time and, as I’m learning, time is of the essence in an after-school club.

One of the kids, Hector, had a really cool idea. He wanted to merge fireworks with Whack-a-witch, to turn it into a genuine game. So fireworks shoot up randomly and you click them to make them explode. He didn’t quite get it to where he wanted, but I’m hoping by next time he’ll either have progressed it at home, or I can help him put it together.

A quick tip for any volunteers running through this project with their club: the instruction to create the explosion as a separate sprite is right at the bottom of one of the pages. A few of my students missed it and got a bit stuck further along. In hindsight, I probably could have helped them make it work with just the one sprite, but we ran out of time.

Something I’ve heard a couple of times from the one year six student in my club is that he’d really like to go straight to the web term. I’m following the Code Club curriculum in order, so he’ll have left for secondary school by the time we get round to the web stuff.

The best compromise I can think of is to give him the web material to work on at home, then answer he questions he has about those if we get a spare moment in the club. I’m pretty sure that having him work on something different to everyone actually in the club is going to be confusing, so I want him working on the Scratch projects too.