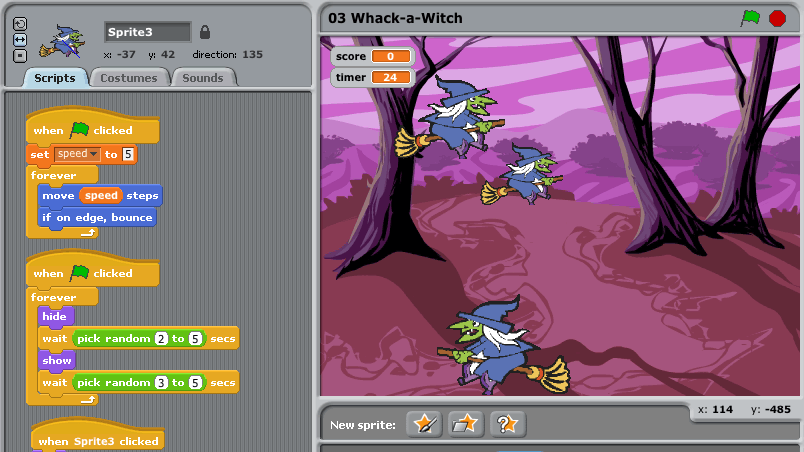 Based on the advice of Rebecca and Keith, I kicked off week 2 with the students seated on the carpet in front of the board while I demonstrated Whack-a-witch, the project they’d soon be coding.

This is a great technique. The moment of relative calm was a good time to ask the students how they were doing, whether they were enjoying the sunshine, and who had tried out Scratch at home. Happily, the majority had.

A quick note: Andrew Johns put together an excellent letter to parents regarding Scratch. It’s well worth printing and sending home with students, or giving to the teacher so they can mail it out. It’s also included in the Code Club material.

You may recall me saying in the first post how much fun it is to use Scratch on a big interactive whiteboard. Well, playing the games you’ve built is even more fun.

I launched Whack-a-witch in full-screen and got myself a score of 18 witches-whacked. The students loved this and immediately wanted to try beating my score. Which they did, easily. If they were so good at playing the game, I suggested, they should have no problem making a better version of it themselves. Everyone scrambled to their computers.

As with Week 1, not all the worksheets printed out correctly. Luckily, I had the PDF loaded onto a thumb-drive so rushed round the room loading it up on everyone’s machines.

At the time, I was worried about how long this all took. The students were anxious to start and it was quite fiddly getting through a succession of Windows security alerts to open the PDF. In hindsight though, it was really worthwhile spending a minute with each student right at the start, to make sure they had everything they needed.

One of the students even realised that I could do with a hand and collaborated with Keith to print the worksheets (in colour!) and staple them together. Solid gold hero.

The biggest lesson for me during club 2 was to spend a decent amount of time with each student when they got stuck. During week 1, I would rush from student to student, reacting as quickly as possible to every call for assistance. This time round, I realised the students don’t mind waiting a minute or two, and had usually solved their own problem by the time I made it over.

Spending that extra bit of time working through a problem was great. With coding, you learn way more when things don’t work than when they do. This goes for adults and kids alike. And anyway, software never works quite right on the first try.

Interestingly, there was one step that nearly everyone asked about.

Learning that the orange variable block could be plugged into other blocks in place of static numbers was a penny-drop moment for the students. They all seemed to twig immediately how powerful this could be.

This insight about variables translates directly to any other programming language, and into algebra and mathematics generally. This is the real genius of Scratch — while the blocks might look fun and friendly, it’s real programming and real logic.

Whack-a-witch sneakily introduces another extremely powerful concept: parallel operations. The chunk of code (left) that controls the witch’s movement is separate from the chunk which makes her appear and disappear (right), but they’re both running at the same time.

It took me ages to get to grips with parallel programming when I first started out, and here Code Club have made it simple and natural. Nice one.

I was given a piece of advice by a friend which goes something like this:

When teaching children, always have a trick up your sleeve. You’ll sometimes need it to win back their attention.

Code is pretty much magic anyway ;) so I would advise getting familiar enough with the project that you can add a few extra blocks and make it do something new and unexpected. It’ll help cement your reputation as a coding ninja, if nothing else.