The first club was chaotic and extremely fun. I was lucky enough to have great support from De Beauvoir teachers Rebecca Stacey and Keith Jones. We didn’t get all that close to finishing the first project, but I think we successfully established that Code Club is going to be a lot of fun for all concerned.

My first job was to get everyone to boot Scratch. Most of the kids dove right in, covering the stage in colourful sprites. As fantastic as everyone’s stages were looking, I had to insist they start a fresh project for the next step to make sense.

With everyone ready to code, I began the introduction to Scratch. This involves working through a “Hello World” project step-by-step while the kids follow along on their own machines. It takes about 20 mintues, and should get everyone up to speed so they can begin the first solo project.

I found most of the kids got on just fine with this intro. There were a few questions, but mostly involving the less-obvious buttons in Scratch’s UI. 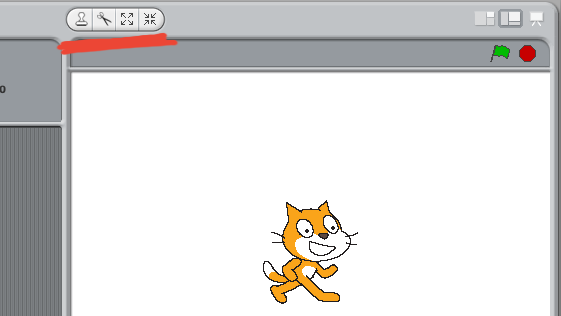 I missed Scratch’s copy, paste, grow and shrink tools the first time I used it. Reassuringly, so did a few of the kids.

The intro wraps up by demonstrating how to save a project and upload it to the Scratch website. This was mostly fine although some of the kids were signed-in to accounts for a different year group, meaning they couldn’t save their work to the correct folder. This is worth watching out for — be sure to ask the teachers what the normal protocol is in IT lessons.

Confident that “Hello World” was in the bag, we handed out the worksheets for Project 1: “Felix and Herbert”. We didn’t have quite enough worksheets for everyone so some photocopies were made while the kids shared. Another note: Scratch’s UI communicates largely through colour, so black and white photocopies don’t really cut the mustard.

Everyone’s pace with “Felix and Herbert” was different.

Some chose to mostly ignore it and focus on putting their newly-acquired programmatic animation and noise-making skills to work on the sprite collages made prior to the intro.

Others worked diligently through the project, but needed a little help understanding the notion that scripts are added in the context of individual sprites or the stage as a whole. This is probably the only aspect of Scratch that wasn’t immediately intuitive, but I’m not sure there’s any better solution. 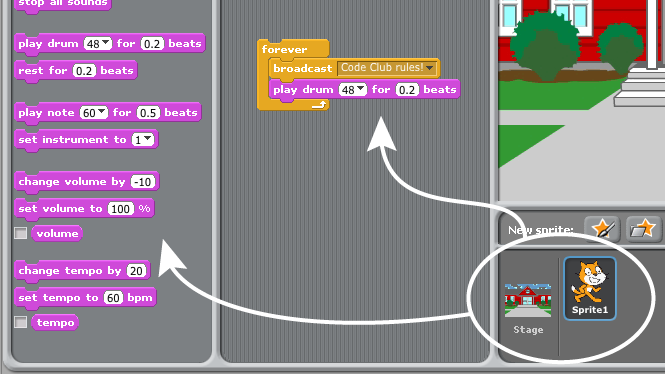 By the end of the giddy and energetic first hour of Code Club, I was exhausted but exhilerated, and a couple of versions of Felix & Herbert were almost complete save for the scoring logic.

Plenty more were still at the “let’s try every costume” phase, but at least the costumes were changing in response to programming logic and events.

I was really pleased to see the kids trying out Scratch’s different control structures, even though the project only required forever. More pleasing still, the kids all asked if they could take the worksheets to install Scratch and complete the project at home.

I cannot wait for next week’s club to roll around.